Get fresh music recommendations delivered to your inbox every Friday.
We've updated our Terms of Use. You can review the changes here.

Land Of The Sun 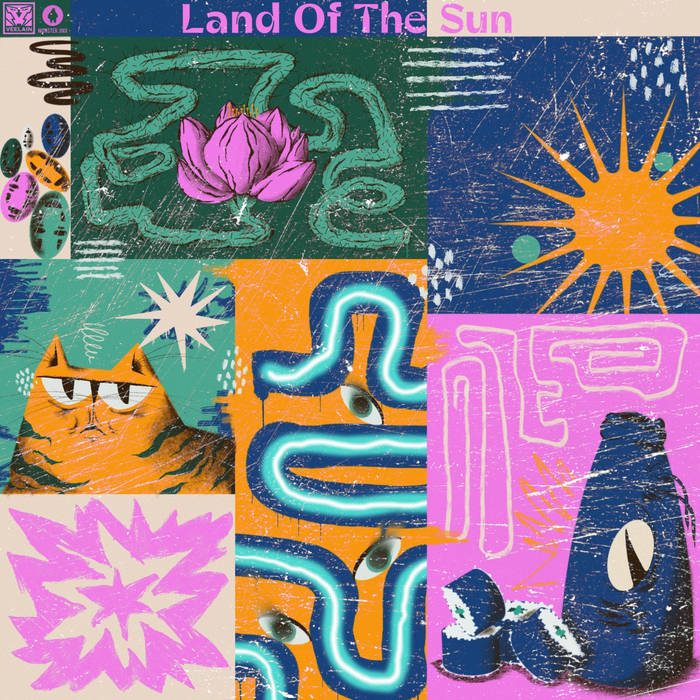 Imagine that your cat (if you have one) was going to Japan? Mine did, and he seems to have had a great time.
This is the (fictitious) motto I came up with in order to immerse myself in the Japanese environment, but to tell this story, it is necessary to go back to 2020. On August 6, 2020 I started this project, which is meant to pay homage to Japanese culture, - or at least the Western perception I have of part of this culture. The project was named "Bad Luck," and in it I would tell the story of a maneki neko who would break for my (Veelain's) fault.

That event would trigger a series of consequences, and I would musically explore Japan from there. The fact is that I abandoned the project for lack of technique and imagination - as happens to me so many times, first-world problems.

Upon joining Monster Jinx, it was proposed to me, by our oldest and most wise DarkSunn, to make a debut album by the purpleest monster on planet Earth - and until proven otherwise, in the entire universe (#fuckthanos) - but, I don't know why, I wasn't in the right mood to make an album. Please note: I feel I have and had made albums, but I don't feel I have THE album, I have this quirk of retreating into little conceptual stories to create the identity of the character, and I felt that what he, DarkSunn, asked me when he said "a full-length" was, "give me what you've been waiting all your life for," but this is another issue you're going to have to wait for.

I went through the archives and this Japanese imagery resurfaced, after one and a half loops around the sun, and a few more around ourselves, and I felt I had the (creative) maturity to make such a tribute to the people of the tidal wave but, - there is always a "but" - I did not want to represent these people as somewhat unlucky. So I armed myself with all the references I have of Japan in supermarket list format - films, books, works of art, documentaries - added some reads to cement certain ideas and undo the clichés - maybe not undo them, but I tried to make them less dogmatic - and started digging deep into the infinity that is the internet.

I came across musicians that, my God, are indescribable: from jazz to rock, through synth pop and funk, the Japanese have an identity, I ended up formulating the thesis that it is possible to listen to the hands of a Japanese person on a keyboard and the hands of an American person on the same keyboard and you can clearly see who is who, they have two different sensibilities, the pain is different, the calm is different, I am really fascinated.

So I set about composing themes according to that supermarket list, and there was only one thing I was sure of: my cat was worthy of a theme, not because he was Japanese, but because for a long time he had been my luck, my maneki neko.

This, at the outset, required of me that the concept be modeled around this fact, but I tried not to create any impediments in the creation, and so what happens on the EP is this: I don't know why on earth - and believe me there is a lot around Japan - my cat ventures into Japan, starting in Tokyo, where he finds that scene of great hustle and bustle, buildings touching the skies and fascinating neon lights - at the beginning of the EP the night had begun. Lost in the middle of the city, half confused, half fascinated by it all, he gets hungry and looks for a double cliché: raw fish. It is not only an easy metaphor to talk about sushi, but also an easy association to make with cats, because mine doesn't even like fish, but I learned that sushi means "sour". After his tummy is full, he goes to a temple in an attempt to find shelter, - he says that in Japan it is cold at night - but he is bothered by No Face - I think that since Chihiro left him with the good old lady, he got bored and went back to the temple, poor thing... Well, my cat gets bored and goes to a swampy forest, laden with Lotus flowers, a beautiful and quiet place he tells me. At dawn, he goes to a beach in Kanagawa, and is there amused by seagulls, just one more thing, I promise - did you know that Japanese seagulls are very different from the ones we see here? - OK, I've got this interesting fact out of the way. It turns out that the ancestral giant wave breaks again and projects him to the foot of Mount Fuji where he can finally fulfill that for which I have destined him in the story: To be the sunset cat and thus pay homage to the red star that shines in the middle of the white flag. Victory, the story is over - or at least this superficial one, the whole album is full of symbolism that I haven't talked about here but, for those curious, send me a message.

MONSTER JINX is, at the same time, an artist collective and a platform for the edition and distribution of independent music.